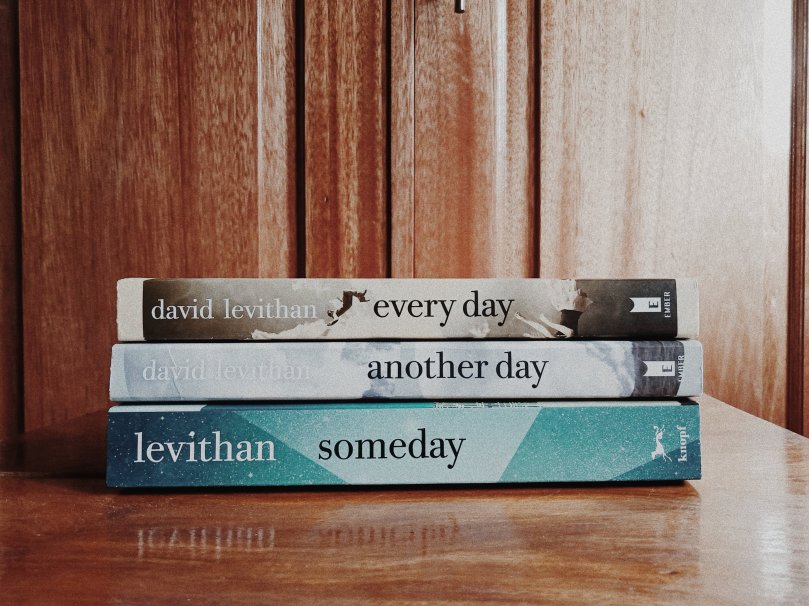 done reading the whole series. i don’t know if the story is already done on ‘someday.’ i got the feeling that david levithan is currently working for another sequel. i mean, the story is unique and exciting and i don’t possibly think it should be told only by three books. there is more to it and i am looking forward on unveiling more secrets this series possibly has. david levithan just invented another wonder for us, humans to think about. a thought adding to what we believe ‘soul.’ what is a soul? and what makes us human?

in the first book, every day, A finds him/herself in a body of a boy in his/her age named justin. you heard that right, A is unusually a wanderer. he/she does not have a physical body and everyday he/she borrows one from a human only in his/her age, may it be girl or boy. he/she doesn’t have a gender either because he/she prefers not to have any—which explains why i’m confused which pronoun should i use. at first, it sounds impossible and unearthly for me since i haven’t read such concept before especially under YA genre, but david levithan illustrates it clearly—how possible it is to have souls just around us wandering and keep borrowing our bodies and we have no idea that it happens.

another, what i like about the concept is that when rhiannon found out who or what A is, she acknowledged him/her. she even fell for him/her regardless of who or what kind of person A is in every day.

meanwhile in the second book, another day, the story is told in the point of view of rhiannon. nothing much has really added to the story only that, we can apprehend better how rhiannon dealt the situation—having someone as a friend who keeps changing body day after day. it must be difficult for her to understand that but it’s amazing how she can manage to love A regardless of his unfortunate state of life.

in the second book, i also learned that loving someone—only if you truly love someone—you would no longer care about the physical attribution and gender of that person. you feel him/her inside. it’s his/her soul that you love regardless of his/her physical flaws and vulnerabilities.

so it was quite exciting when levithan finally published another sequel—which is someday. the third book is somehow different compared to the previous ones. in someday, the rhiannon and A thing is no longer the center, it’s now about A and others of his kind. of course their love story continues, but acknowleding this unique concept i sure think levithan had decided to go on more details about how he came up to this.

i felt levithan’s imaginative puissance as i read the whole series. his great talent to persuade his readers through his characters is so strong that you might even believe such thing really happens. when i was reading, i thought maybe this really happens, that there are actually lost souls wandering from body to body and we don’t know it because everything just feels normal when a lost soul borrows our body for a day, just like how levithan explains it in this series. he explains, in a novel sense that a person doesn’t notice his/her body has been borrowed for a day nor lost a day being possessed by someone like A.

don’t you think it’s somehow amazing how you can just transfer to another body and know what that person you are borrowing a body from feels about the world? i think it’s quite amazing but a bit lonely. i don’t think i can handle living such life like A. he/she doesn’t even have a life. the only person he/she can talk to about everything he/she feels is rhiannon. because she’s the only person here who knows him/her aside of nathan, who happens to discover about A as well.

if you are a huge fan of novels with unique concepts and unimaginable plot, this will probably ring a bell. you will be fascinated reading A’s life dashing in and out from a body to another. nothing is impossible to exist. even this world is a mystery to think.

i was born in the last quarter of the year 1997, raised by a mother whose life on papers and a father whose hands on woods. i have fair skin like most filipino people do and a mind with clouds of thoughts. i did not do well in schools but ironic to say, i am now a licensed professional teacher.

i hope you enjoy yourself here as much as i enjoy writing my weird fascination from books to my personal life.