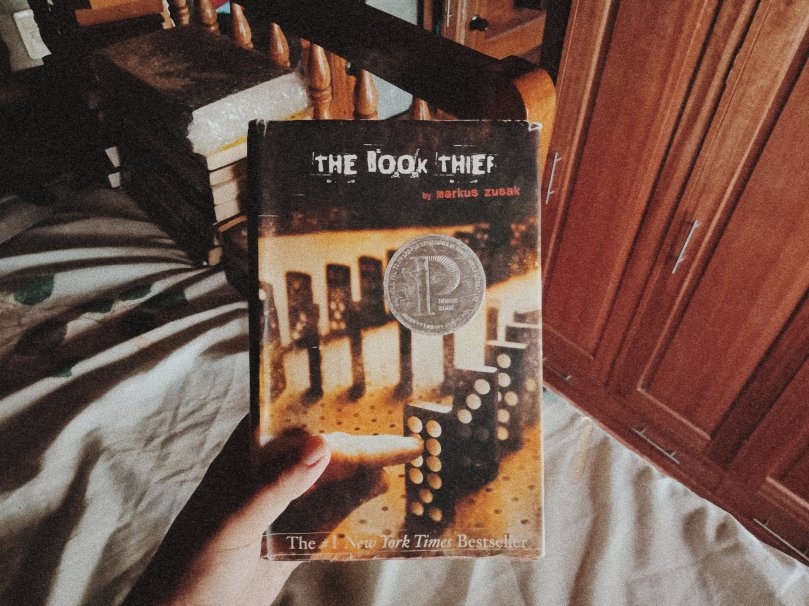 i assume everyone has already read this book. i mean, the moment i realized i was in love with books, it was there. the night i binge-watched some youtube videos and got lost to a blogger that recommends books to read, it was there. and the day my cousin donated some books to me, it was one of them. it always has been there.

i have read great books before but i haven’t put so much attention to this. now i’m regretting to have read it this late—it was just last year that i had time to read it—because this book is so good and enticing. the dramatic poignance of this book is truly affecting and learning.

of course there are lots of reasons to list down why you should read this book. but i’m just going to list down the five major things why i love it and made me decide to keep it my favorite.

the story is historical-fiction. it was time-framed during the time of hitler’s dictatorship. how sad and cruel it was. i have learned how germans had to go through such things mentioned in this book, especially the jews who happened to have done nothing but live in peace. at least by the words of this book, i have seen so much emotions and angst among the people during that time. i have visioned the loss, sympathy, and death so clearly and vivid.

it’s not the type of the story where the antagonist is also a major character. everyone has a story to tell (and everyone is kind and soft-hearted which really adds up as a reason). because the only antagonist here is time. i felt so sorry how these people had to live their lives with their sick dictator and for all the hiding and worrying whether someone will be dead or not as if they are real. yes, you’d probably think it’s based on a true story of a girl who lived in such time of chaos and bombing. but it’s just another fiction novel that lets you fall in love only to break your heart at the end.

okay, i told you about everyone being the protogonist, right? they are. but liesel meminger—the book thief—is the girl why the story has told. i know her character is supposed to be sad and sympathizing but it seems that i was the one who just felt sad for her. she doesn’t even feel sad for herself. her brother died, her father left, and her mother gave her to a foster family. of course she was sad about this, in fact she doesn’t even want to forget about them. but liesel is a happy child. she learned to adapt herself to her new home and learned to socialize and make new friends. she is a wonderful kid. she steals book which can make her remember about the things or people she should not forget.

it’s amazing how someone out of unverse’s time has to put time on telling such story. as death—the narrator—was doing his job fetching souls from body to body, he was fascinated by this girl, liesel meminger. death encountered her not only once but many times. i’m not quite sure what was it that fascinated him with her, but i think it was the book thief’s soul that is quite of an interest. she has a wonderful soul, i believe.

i know it’s another contemporary fiction novels—being the time frame based on contemporary moments of war. but it is not the type of contemporary with cliché plot twist just like other novels have. it’s not. it’s just another short story of a girl with life that was supposed to be simple but unforunately, she had lived in the times of war.

i was born in the last quarter of the year 1997, raised by a mother whose life on papers and a father whose hands on woods. i have fair skin like most filipino people do and a mind with clouds of thoughts. i did not do well in schools but ironic to say, i am now a licensed professional teacher.

i hope you enjoy yourself here as much as i enjoy writing my weird fascination from books to my personal life.